My dad was a film lecturer, and was always visiting London film institutions like the BFI, the NFT and the Goethe Institute, often with me in tow. One day when I was eight years old, he took me to London’s Museum of the Moving Image (MOMI for short) on the South Bank. It was fascinating: there were all kinds of activities for kids to do, but the one I remember best was drawing your own animation.

You were given a long strip of paper with eight rectangles on it, and told to draw a cartoon. You drew a similar scene in each rectangle, with a subtle change. Then, when you slotted the paper into a round spinner called a zoetrope (shaped a bit like a lampshade; the paper filled the inside of the lampshade) and spun it, you could see your animation come to life.

[A zoetrope I nicked off Wikipedia. That’s not my carpet, I PROMISE.]

As I was rude and cheeky, I thought it would be funny to draw a man picking his nose. I started with his finger below his nose, then made him push it into his nostril, then pull it out covered with green slime.

My dad, who shared my sense of humour, thought the animation was hilarious, and laughed uproariously when he saw it. He said to me: ‘Next time, do something really raunchy!’

I frowned: ‘What does ‘raunchy’ mean, Daddy?’

‘OK,’ I said, baffled but pleased to be given carte blanche to draw rude things.

I don’t think we ever visited again though. And sadly, the Museum of the Moving Image closed down 12 years later, so I can’t even continue the family tradition by taking my eight-year-old there and telling her to draw a cow farting. 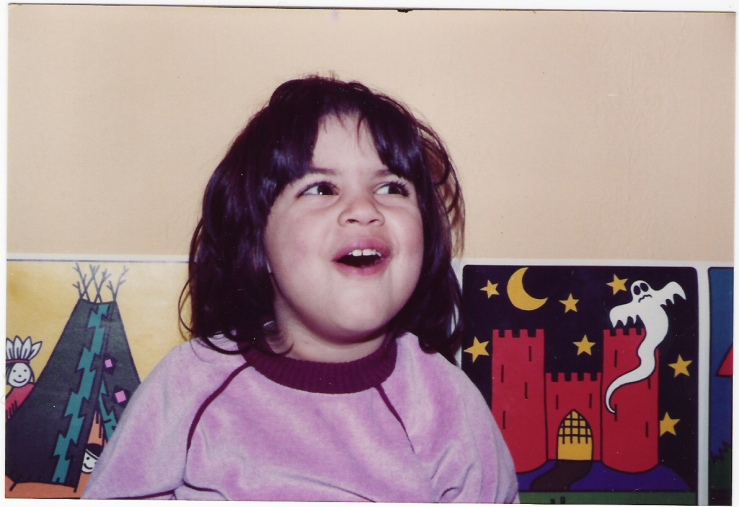 [Me, aged three or four. I don’t have any photos of myself
from the ages of five to ten, so this will have to do.]