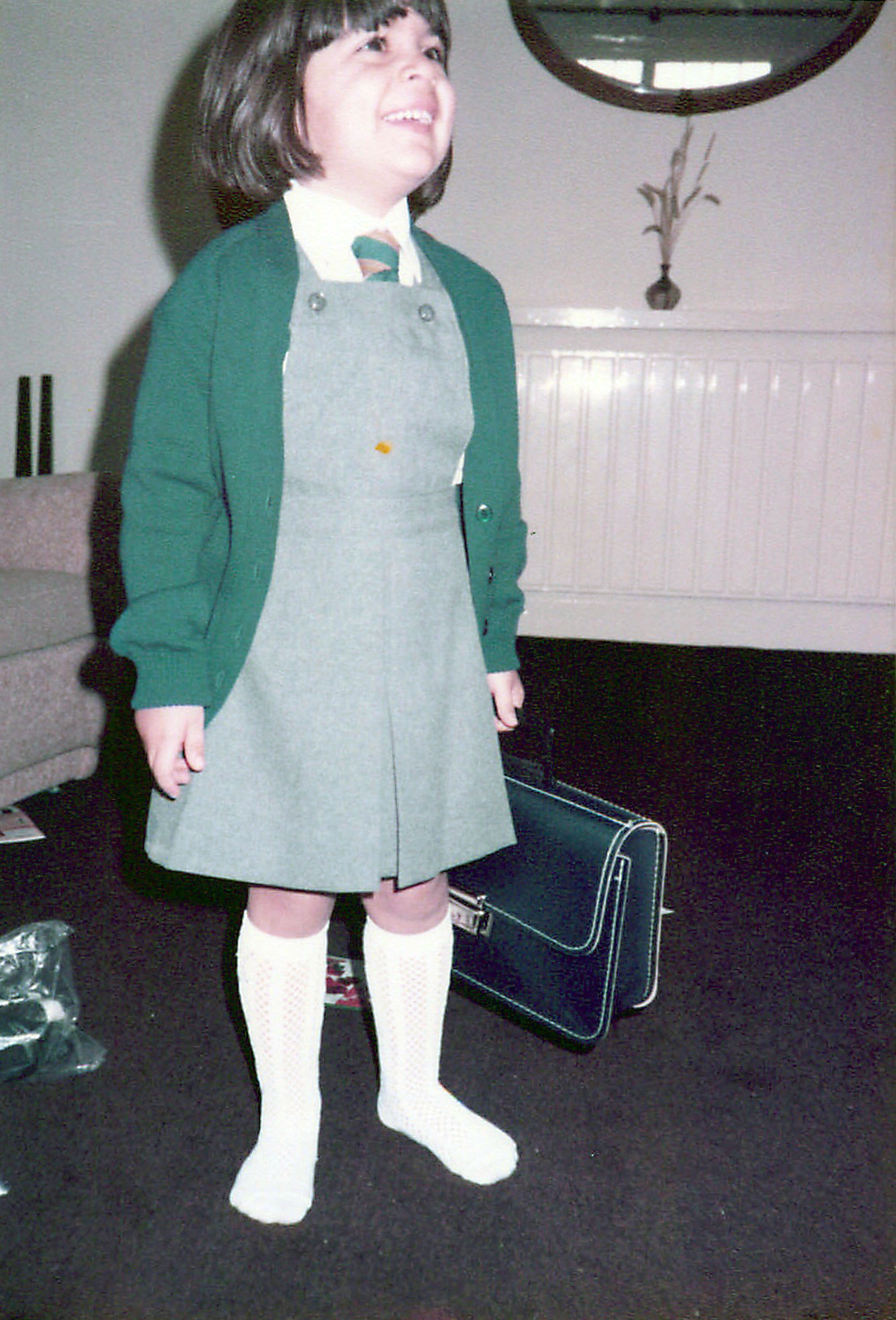 I was seven years old, and at primary school in Willesden Green, North-West London. There, my brown skin didn’t mark me out as different, as most of the kids in my class were varying shades of brown.

One afternoon, I was seated next to a boy from Ghana called Kwame. When I say ‘from Ghana’, I don’t mean he was ethnically African but actually from London like me, but that he had emigrated from Ghana recently, and didn’t speak much English.

The teacher handed out pieces of blank white A4 paper, coloured crayons, and misshapen lumps of white wax.

“Today you are going to be making a card for the person next to you,” she announced. “You’re to fold the paper in half, design the front of the card with the crayons, then write a message inside using the lump of wax.”

This seemed a pointless exercise. After all, the wax didn’t show up on the white paper, so it wouldn’t matter what I wrote inside. I could write anything.

And then I smiled mischievously to myself. I had heard other kids talking about something called ‘sex’ in the playground. I didn’t know what it meant, I just knew that it was rude.

The lump of wax was heavy and unwieldy. Inside my card, I wrote:

I hope you are well.

I sat back, pleased with my invisible handiwork.

Then I heard the teacher say, “Now swap cards with the person next to you, and go over the inside of the card with felt tip to make the writing appear.”

I tried to stay calm. It was okay, I told myself: Kwame couldn’t read much English, and even if he did know a little, he wouldn’t know what ‘sex’ meant. I was safe.

Kwame and I swapped cards. I can’t remember what his said. I just remember freezing as the teacher walked over.

“What does your card say, Kwame?”

And then he stopped, frowning.

The teacher looked over Kwame’s shoulder at the card. She silently snatched it from him and strode from the room without a word, the door swinging shut behind her.

“What does ‘sex’ mean?” I asked suddenly, panicked, to no one in particular. “I wrote ‘sex’ in my card. What does it mean?”

“UMMMM!” said the girls in my class. It wasn’t a sound that conveyed uncertainty: in the 80s in Britain, “UMMMM” was a noise that meant “now you’re for it”.

“You better pray, girl,” one of the Caribbean girls said. “You better get down on your knees and pray to the Lord that she isn’t telling your mother right now, girl!”

I started to tremble. Maybe I could say it had been a mistake?

But how could I have written ‘sex’ in error? And now I’d told the entire class that was what I’d done. They were right to say “UMMMM”: I was in big trouble.

But when the teacher came back, she didn’t mention anything about the card, or why she’d left the class for so long. She merely said “I’m going to bring round the box so you can put your materials back in.”

I thought perhaps she’d phoned my parents, but when my mother picked me up from school, she didn’t say anything about the incident either. Nothing was ever said, and for several years after that I was none the wiser as to what sex actually was.

As if not content with writing a rude word in the card, I also stole the lump of wax, as I was going through a kleptomaniac phase. I didn’t want to be discovered, though, so I hid it in my knickers and walked home in a slightly strange way. My mum asked why I was waddling. I said there was no reason, and tried to waddle a little less.

I was a very strange child. 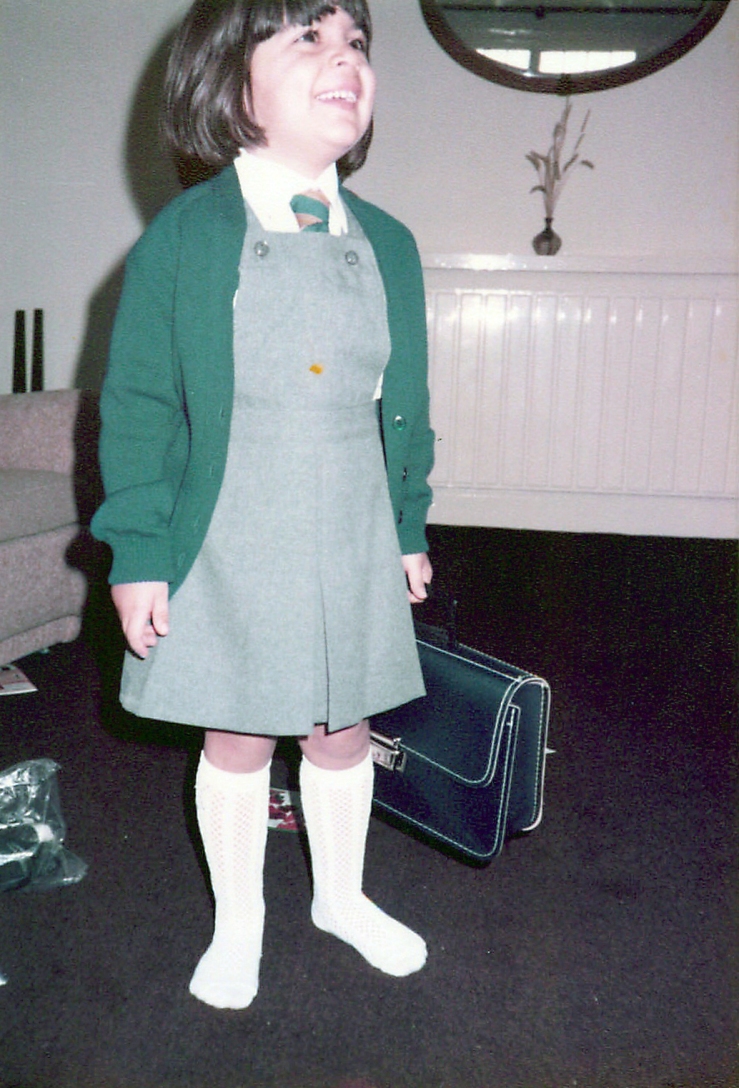 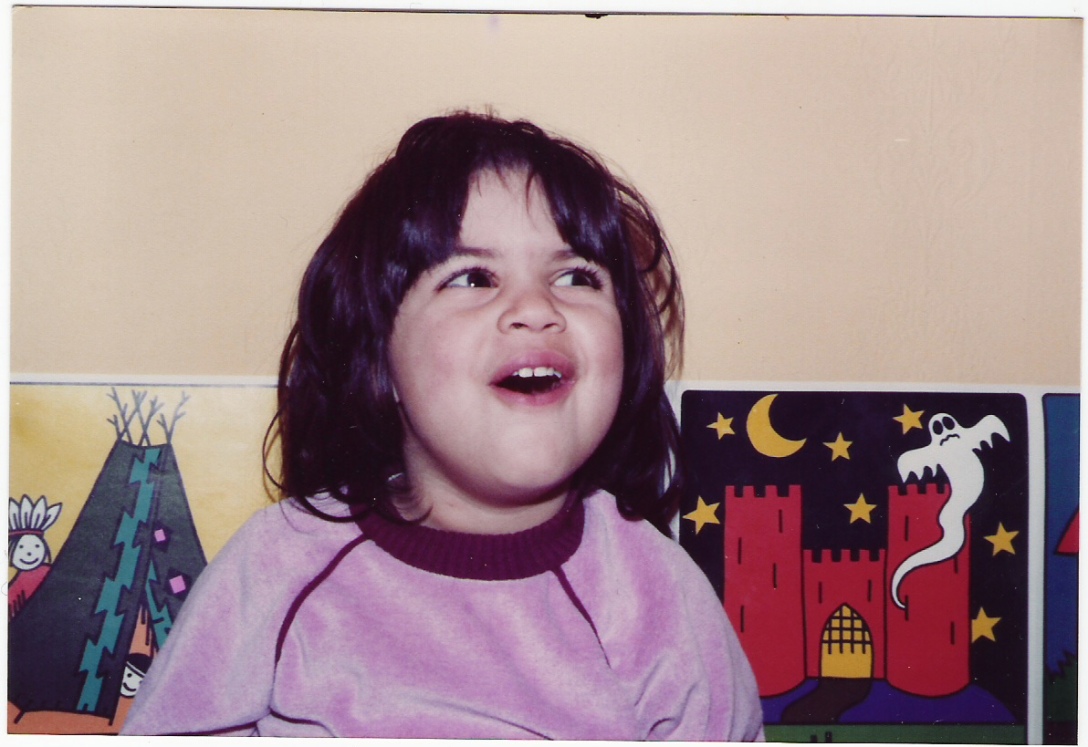 My dad was a film lecturer, and was always visiting London film institutions like the BFI, the NFT and the Goethe Institute, often with me in tow. One day when I was eight years old, he took me to London’s Museum of the Moving Image (MOMI for short) on the South Bank. It was fascinating: there were all kinds of activities for kids to do, but the one I remember best was drawing your own animation.

You were given a long strip of paper with eight rectangles on it, and told to draw a cartoon. You drew a similar scene in each rectangle, with a subtle change. Then, when you slotted the paper into a round spinner called a zoetrope (shaped a bit like a lampshade; the paper filled the inside of the lampshade) and spun it, you could see your animation come to life. 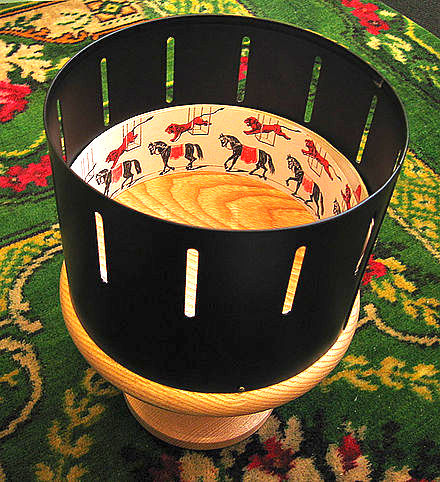 [A zoetrope I nicked off Wikipedia. That’s not my carpet, I PROMISE.]

As I was rude and cheeky, I thought it would be funny to draw a man picking his nose. I started with his finger below his nose, then made him push it into his nostril, then pull it out covered with green slime.

My dad, who shared my sense of humour, thought the animation was hilarious, and laughed uproariously when he saw it. He said to me: ‘Next time, do something really raunchy!’

I frowned: ‘What does ‘raunchy’ mean, Daddy?’

‘OK,’ I said, baffled but pleased to be given carte blanche to draw rude things.

I don’t think we ever visited again though. And sadly, the Museum of the Moving Image closed down 12 years later, so I can’t even continue the family tradition by taking my eight-year-old there and telling her to draw a cow farting.

[Me, aged three or four. I don’t have any photos of myself
from the ages of five to ten, so this will have to do.] 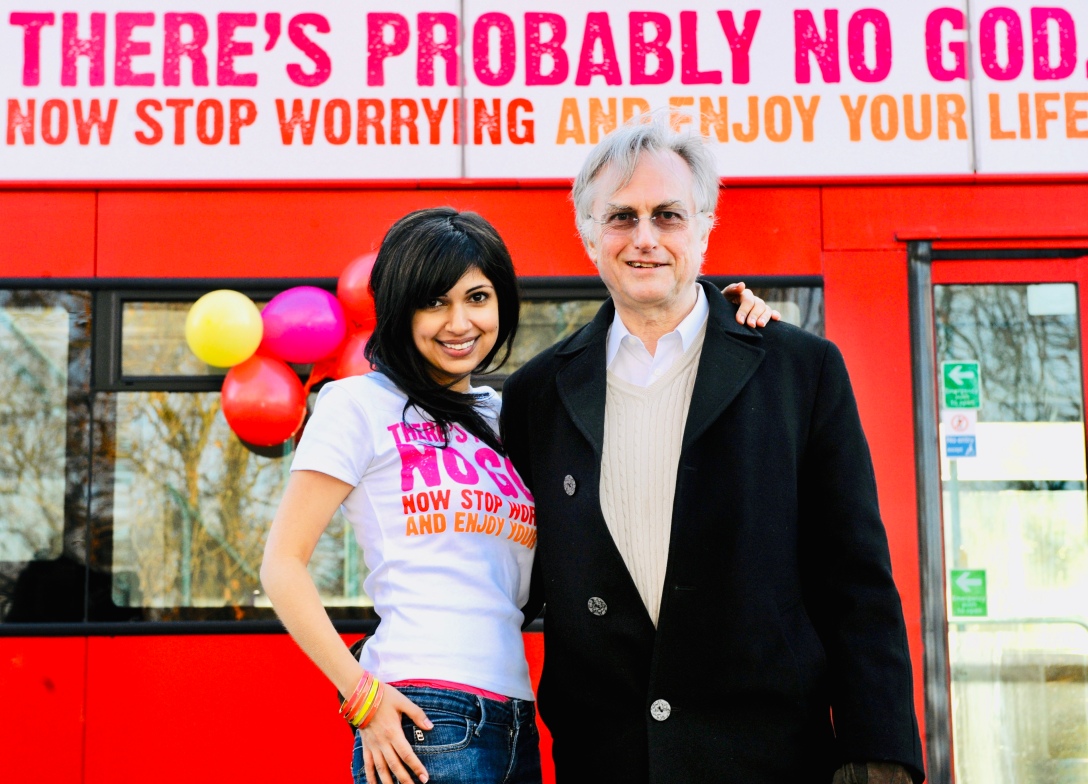 In 2008, I created the Atheist Bus Campaign – an atheist advertising campaign running on British public transport with the slogan ‘There’s probably no God. Now stop worrying and enjoy your life.’ The UK campaign was only meant to raise £5,500 over six months, but such was the strength of feeling among atheists, it raised £100,000 in four days. It then went global, running in 13 countries around the world, from the US to Germany to Australia.

Because of all this, the press wanted to interview me a lot. One of the keenest outlets was BBC Radio 4, home of regular religious morning slot Thought for the Day. As I wasn’t religious, I wasn’t allowed to do a proper Thought for the Day, but gave the first atheist Thought for the Afternoon instead a few months later. Soon after the bus campaign launch, I was also asked to chat to Edward Stourton on the regular Radio 4 weekend programme Sunday. 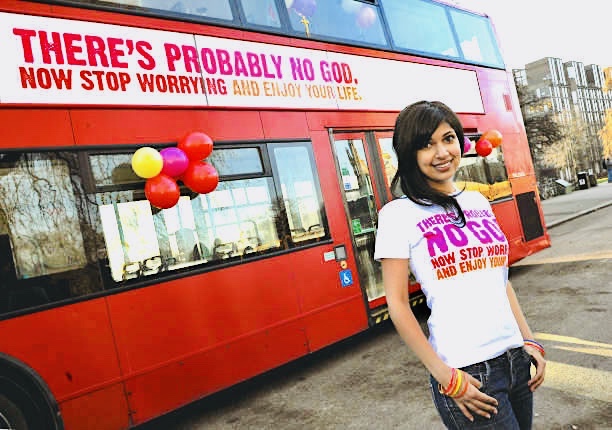 Ironically, I was very bad at taking public transport at the time, as I had experienced severe claustrophobia since being violently attacked and suffocated during pregnancy in 2005. If I was ever trapped somewhere I felt air was restricted, and I couldn’t escape, I would quickly start hyperventilating and have a full-on panic attack. This happened most often when Tube trains stopped in a tunnel underground, but it also happened in TV and radio studios, which either have no windows, or windows that don’t open.

The interview on Sunday was arranged for late October 2008. It was to take place remotely in a BBC studio in Weston House in Great Portland Street, London. I was shown into the studio and was told to wait there on my own for a phone call from Edward Stourton. I set my bag down, put the headphones on and waited. And then it occurred to me that I was in an airless studio with the door shut.

So I took the headphones off and ran over to the door, expecting to be able to open it easily – but it wouldn’t budge. I tugged it hard, but it was so heavy that my brain decided it was locked. And then I started to panic. I was going to die there with no air. I yelled as loudly as I could, but the security guard who had let me in was gone, and there was no one in sight. Why had they locked the door? Maybe they wanted me to die there. I started screaming and crying and shaking.

Then I called my friend Charlie Brooker, and told him what was happening. ‘I’m locked in a studio and am going to die!’

He was very calm and said ‘You’re not going to die. The BBC is the safest place in the world. Calm down. Slow your breathing down. Breathe with me – in – out. In – out.’

I breathed along with him, and slowly felt myself relax. Then I noticed there was an emergency number by a landline phone on the studio desk. I told Charlie I was going to call for help, and phoned the number on the desk. ‘I’m trapped in the studio!’ I told the man who answered. ‘Please can you come and let me out?’

The security guard came quickly and opened the door. It wasn’t locked, he told me – it was just very heavy and stiff, in order that the room would be soundproof. I asked him if he could come and sit in the studio while I did the interview, so that I would be able to get out afterwards. He agreed, and I relaxed and took part in the interview. Edward Stourton was very nice and reassuring, and was kindly and avuncular towards me, despite being a staunch Catholic.

In fact, except for my claustrophobia and the heaviness of the studio door, there was only one unsettling thing about the whole experience of doing an interview on atheism: the BBC emergency telephone number I’d had to dial in order to get rescued…