Someone asked on Twitter, ‘Ever had a fight with a celebrity?’ To be honest, I’ve had a few, but the one which really stands out was my appearance on The Alan Titchmarsh Show on ITV1 in March 2010, just before my nervous breakdown. It was a debate about whether it was a shame that Britons are less aware of the Easter story these days – and it wasn’t a fair debate, either, because it was three Christians (Alan himself, Gloria Hunniford and some arse from Christian radio) against me. This was over nine years ago, so I’m trying to dredge up all the depressing details from the bit of my brain where I’ve repressed them – apologies in advance for any inaccuracies. 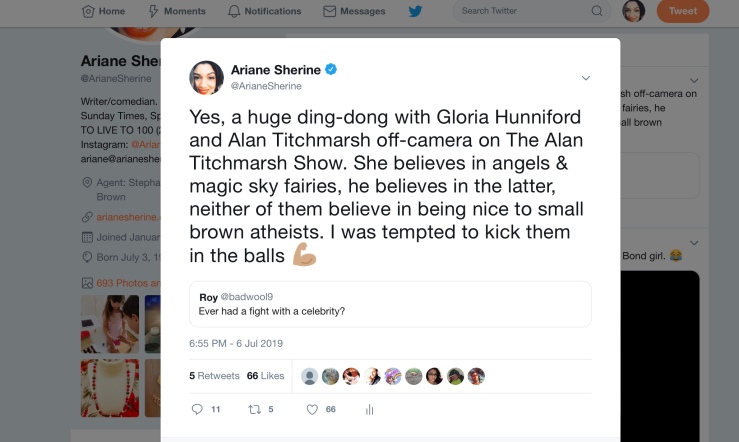 I will never forget that Alan, Gloria and The Arse were all horrible and made it very clear that they didn’t like atheists at all. They were making jokes and exchanging pointed glances at my expense, and I felt very isolated and upset. There was literally no one in my corner. If I had been cool-headed when the cameras were rolling, I would have made Barack Obama’s point that ‘We are no longer just a Christian nation, but also a nation of Muslims and Jews and Hindus and Sikhs and non-believers’ (I’m paraphrasing here). I would have asked Gloria, Alan and The Arse from Christian Radio whether they were aware of, say, Zoroastrian stories, or stories of all the other religions – and if not, why was it more of a shame that Britons of other faiths weren’t aware of the details of the Easter story than vice versa?

But prior to the debate, the producer had tried to polarise it and take all the nuance out of it, insisting I ‘go in really hard – it was great when you said on the phone that religion was stupid’. Worse, none of the other participants would talk to me when I tried to be friendly, and then Alan grimly deigned to tell me in a threatening way that the debate would be ‘VERY feisty, VERY feisty indeed.’ When I was introduced as an atheist, I got roundly booed by the blue rinse brigade audience, and Alan joked that the response ‘wasn’t very Christian’, but I could tell that he was loving it. I tried to laugh it off, but was rattled. Then I completely lost my thread during the debate, and said that the Easter story was effectively a snuff movie, but I wasn’t as articulate and cogent as I would have liked to be, as they were all ganging up on me. It was a pretty dreadful performance on my part.

Afterwards, off-camera, Gloria and The Arse laid into me, laughing smugly that I was ‘awful and scary’ and ‘showed atheists in a very poor light’, and I snapped at all three of them that they were ‘fucking arseholes!’ and walked away shaking. My brain was telling me that I was hated and that someone out there was going to kill me, and days later I became suicidal – and the suicidal ideation lasted for over a year. I also refused to appear on telly again for a ridiculous number of years (eight? I’m not sure). However, I’ve never blamed my nervous breakdown on my appearance on the show, because though it was probably a contributory factor, my mental health was already very poor and this was just the last straw.

I can see, though, that being ganged up on 3-1 (plus factoring in the 200-strong elderly Christian audience, who were clearly the last remaining churchgoers in the UK) was not right. Producers have a duty of care and I wasn’t taken care of at all – I guess they thought I could fend for myself, but they were totally wrong. So I can completely understand why there have been suicides after similarly combative shows such as Jeremy Kyle. Leaving a show with the idea that everyone hates you is horrendous, especially in the age of social media.

Alan was right when he said the show would be feisty, but he could also have applied the adjective to me – though very mentally ill and anxious, I am simultaneously quite hot-tempered. I come across as placid and easygoing, but if something riles me, I see red. So during and after filming, I was experiencing a very intense, confusing mixture of anger and fear. They say that all anger is really fear, and they’re probably right, though I was also harbouring fantasies of channelling Rocky. I didn’t kick Gloria in the fanny, Alan in the balls or The Arse in the arse though, even though I really wanted to, as I didn’t want my foot to smell.

Anyhow, fast-forwarding nine years to yesterday, I had an awful heated row about money with my ex-husband. We both dredged up lots of bitterness and resentment from our marriage (though friends, we both hold serious grudges and keep score massively. Some therapy would really help right now if either of us could afford it). He apologised for ‘being a dong’, though not before I had a huge emotional binge on all the junk food in the kitchen. So I’m back up to 13 stone again today and feeling very ashamed, which is miserable – but not as miserable as appearing on The Alan Titchmarsh Show.

I swear he’s the subconscious reason I don’t like gardening and have decked my whole back yard. 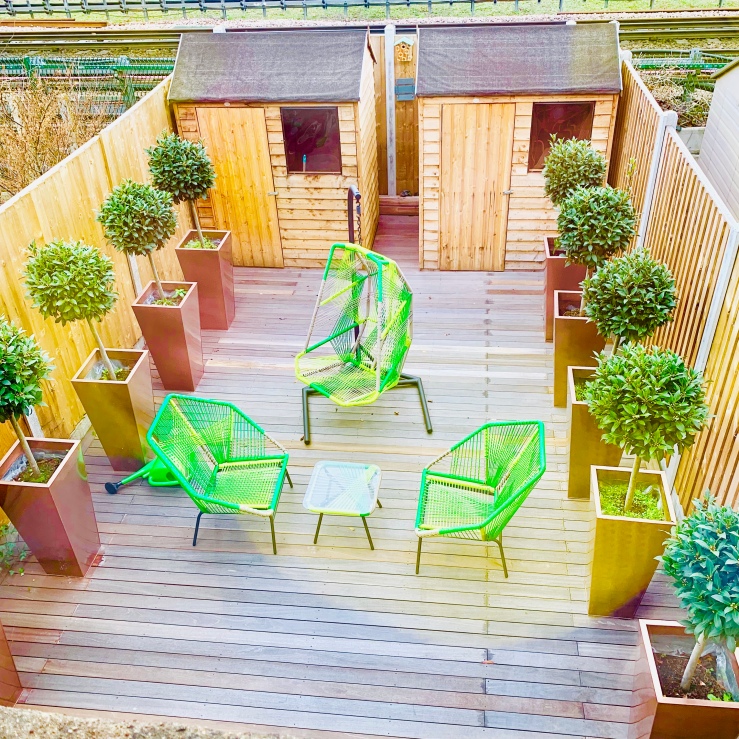 They receive a whole host of amazing rewards in addition to this credit! Please support me on Patreon.